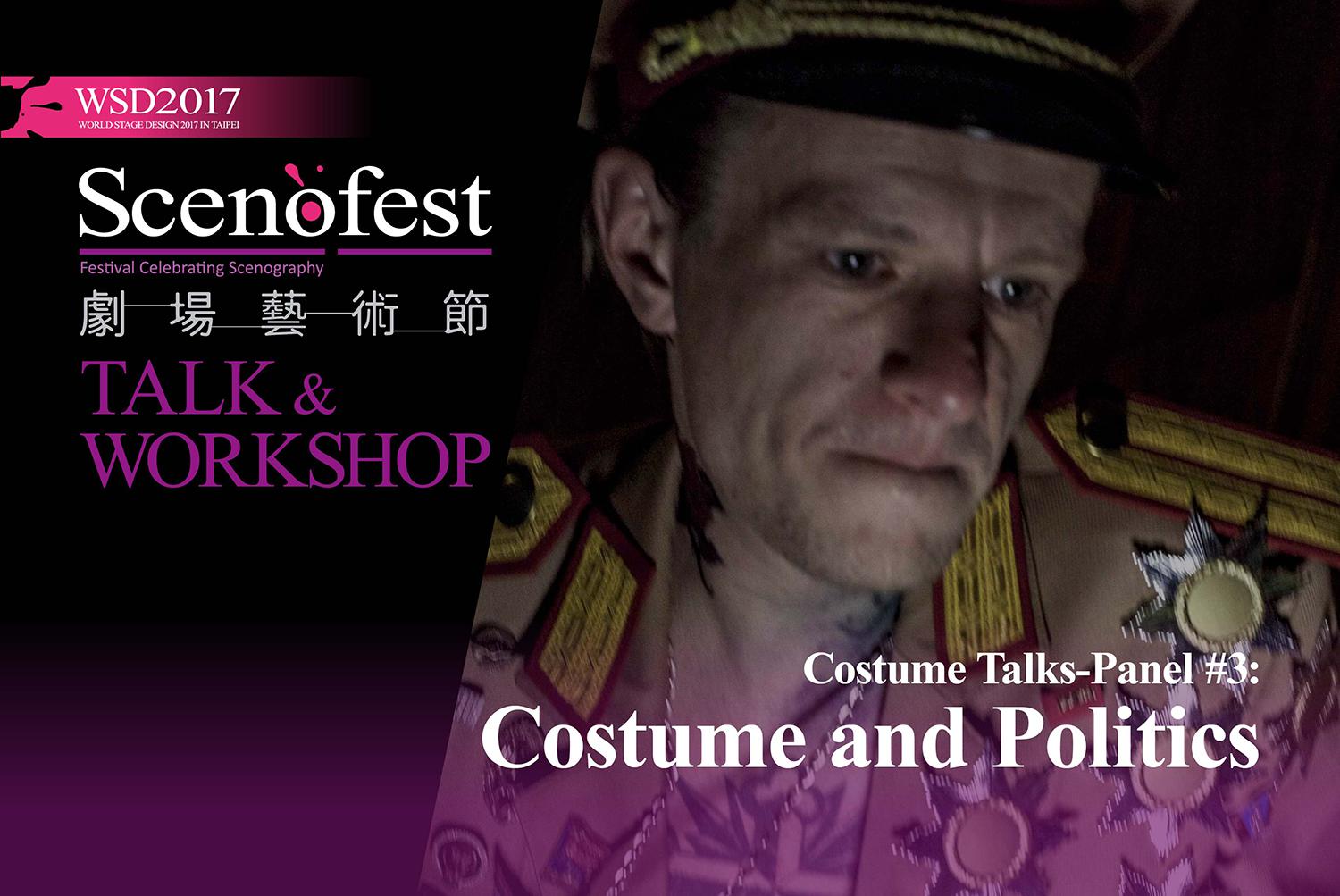 This panel explores the relationships between costume and politics, globalization and costume as signifier, considering the context of the costume design created forperformances in public spaces. Three presenters will offer examples of the wearing of politics, of costume choices as political acts in the midst of the public. Who assigns the meaning of the costumed body in an age of homogenised globalization?This panel focuses on different political influences on costumes and invites an open discussion on this theme.

GREGOR STURM
Costume and Politics
In times of globalisation, the way we clothe ourselves becomes more uniform around the world. One could think everybody on earth has the same choice of clothes, especially if the rapper from Brooklyn looks like the poor guy from Central Africa. But neither the rapper nor the poor guy wants to look the same! But what are the differences in clothing today? There are religious and traditional costumes, but even they are under the influence of new trends set by the global players of couture labels and the clothing industry. Does this uniformity influence theatre costumes? What is a political costume on stage today?

Gregor Sturm is a scenographer, costume designer, theatre manager and architect,working for theatre and opera productions across Europe. He holds a Master’s Degree in stage and costume design, and diplomas in architecture and in theatre management. He is a member of the executive board of the German Scenographer Association (Bund der Szenografen) and the German Delegate for Performance Design in OISTAT. He has also initiated some major changes within the German theatre system by developing a movement called ‘40.000 members of the theatre meeting with their government officials’.

MARCELO DENNY & MARCOS BULHÕES
Visuality and Politics
This presentation offers a reflection on the possibilities of a dialogue between the urban performance BLIND and the various spaces where it experienced around the world. How did the performance change in diverse visual spaces with diverse political histories? Objects and gestures helped compose new ways of reading the political and ethical blindness of each city. The mediation of group creation and performance manifested new powerful images that translated the local idiosyncrasies.

Marcelo Denny, PhD, is a theatre and art director, set designer, visual artist, performer, and curator. He holds a Master’s Degree and a PhD in Performing Arts at the University of São Paulo, where he teaches scenography and performance art. He is the co-founder of DesvioColetivo among other theatre companies. Denny is the winner of several Brazilian theatre festivals. He created a special art piece inspired on his performanceBLINDfor PQ’15, as part of the Brazilian exhibition.

Marcos Bulhões, PhD, is a director, actor, professor and researcher. He holds a Master’s Degree and a PhD in Performing Arts at the University of São Paulo, where he is a teacher of directing and performance. Bulhões is one of the directors of the performance BLIND and of the DesvioColetivo group, with whom develops his academic research entitled “Performative Coralities” and “Brazilian Urban Intervention” with Marcelo Denny.

SODJA LOTKER
TheTribes – Politics of Costume and Group in Public Space
The Tribes at the PQ’15 consisted of 83 groups of people dressed in a variety of costumes walking a strictly designated route through the city of Prague during the course of 11 days. It was an experiment in exhibiting costume design in motion in the city. But it was also an experiment of costume creating space through presence as well as creating space for difference, with a political undertone, in public space through presence of costume. The presentation will include over 700 photos and a discussion between Rachel Hann, Sofia Pantouvaki and Sabrina Notarfrancisco, based on the questions of the curator.

Sodja Zupanc Lotker is the Course Leader of the Master in Directing Devised and Object Theatre at the Prague Performing Arts Academy (DAMU). She works as a dramaturg for independent theatre, dance and site-specific projects and was Artistic Director of the Prague Quadrennial of Performance Design and Space (2008–2015), which received the Europe for Festivals – Festivals for Europe (EFFE) Award in 2015–2016.

In English without translation
英語演講，無翻譯

Lecture｜Benefit of having European-like standards and regulations