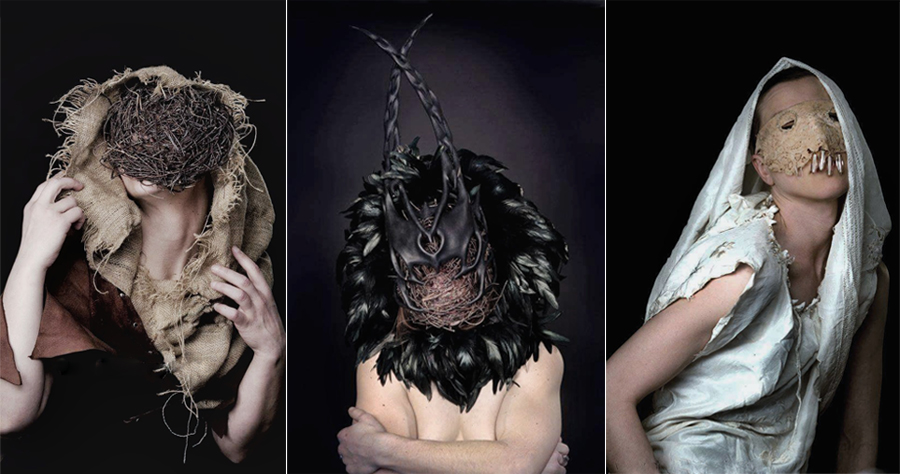 In this workshop, we will explore the concept of the Jungian Shadow on a personal, societal, and performative level. Carl Jung described the Shadow as the aspect of the psyche in which we store those parts of ourselves that we do not wish to acknowledge - things that make us feel ashamed, frightened, weak, or powerless. In rejecting our own Shadows, we unconsciously project them onto others, creating monsters and enemies that are more revealing of our own darkness than anything else.

Integrating mask-making, movement, conversation, and gentle humor we will lead participants through a series of “material storytelling” exercises that draw on our devising process for Shadow Tender. By staging encounters with your personal Shadows through the medium of the mask, we will facilitate constructive dialogue about the monstrous inside of us, and address questions of identity, personal bias, and communication.

Natalya Kolosowsky is Russian-American director, performer, and interdisciplinary teaching artist based in Portland, OR. Natalya received her classical ballet training under Kee-Juan Han and has studied and performed in circus arts, improvisation, butoh, physical theater, and various devised works. She was the founder and artistic director of the Anatomia Dance Collective, and has worked on projects for Flam Chen Pyrotechnic Theater, San Francisco City Circus, the Salzburg State Theatre, and most recently, for Michael Curry Designs. Her work has been presented in many venues in the US and abroad, including the Museum of American Illustration, Paolo Soleri’sArcosanti, the 2013 WSD festival in Cardiff, the A. A. Bakhrushin State Theatre Museum in Moscow, and the 2015 PQ. She holds a BFA in Visual Communication and a BS in Psychology from the University of Arizona as well as an MFA in Costume Design from the University of Oregon.

Magda Kaczmarska is a Polish-American dancer, choreographer and teaching artist based in Brooklyn, NY. Magda has trained and performed extensively in classical ballet, contemporary/modern, folk dance and improvisation. She served as co-founder, choreographer and performer with Evolve Dance~West and her work has been presented at the Tucson Museum of Art, the Fred Fox School of Music, ZUZI and Stevie Eller Theatres in Tucson, AZ and at Shoestring Press in Brooklyn, NY and the LEGS Performance Festival in Giswil, Switzerland. Magda holds a BS in Biochemistry and Molecular Biophysics from the University of Arizona and an MFA in Dance Performance and Choreography from the University of Arizona School of Dance.

Maria is multidisciplinary artist, martial arts instructor, and stunt woman based in Portland, Oregon. Maria has over 16 years of experience in multiple martial arts, and is a 3rd degree black belt in Tang Soo Do.  She has over 13 years of teaching experience and is one of the only women trained in both the coaching and attacker roles of the FAST adrenal stress self-defense training. She has choreographed and performed in internationally award-winning martial arts demonstrations, and provided stunts and creature movement for stage, television and independent film projects. As a co-founder, costumer, and dancer for the Anatomia Dance Collective, she performed along the west coast of the US. She holds a BFA in Visual Communication from the University of Arizona.

*The age guidance for this workshop is 16+
*Clothes to move in, basic crafting supplies:scissors, glue, string, notebook

Informal Discussion｜What Do You Think of the WSD Exhibition